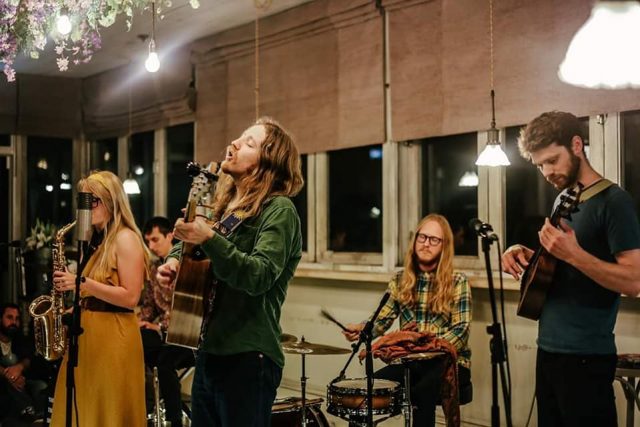 Following on from the success of their debut EP, The Only One, Bristol-based band Sugarmoon’s latest single, Autumn Leaves, is like a park walk on a crisp October day.

Recorded entirely during the spring lockdown, the track features sleepy, tranquil melodies, and the velvety vocals of Sophie Jones. The calm yet melancholic atmosphere of the track, and its 1960s sound that is emphasised by the stylish music video that accompanies it, makes it reminiscent of bands such as The Mamas & The Papas, and The Turtles.

Originally, the track was intended to be sung by guitarist Ryan McMurtry, who also wrote it. However, he lost his voice at the very beginning of the lockdown back in April. With a live stream planned, the band quickly swapped the key of Autumn Leaves, so that Sophie could sing it instead. “We were all blown away by how it sounded”, Ryan says. “So we just kept it like that when recording!”

The track’s lyrics are undoubtedly something special. They are completely intriguing and gorgeously crafted, touching on the mental strains of love and loss. Fantastic imagery is conjured up through lines such as “like sailors on a sunless sea, we’re slaves to the endless nights”. The uniqueness of the track’s lyrics makes the emotion behind the music come across all the more strongly. Autumn Leaves is a completely beautiful and moving track that you’ll want to listen to over and over again.