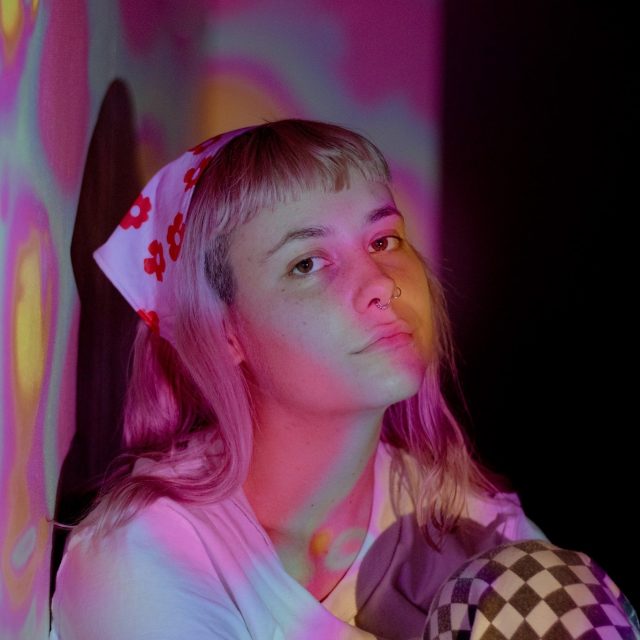 19 year old bedroom pop artist Mollie Coddled’s songs are as sweet as her name but underneath the sugary exterior lies deep poignant explorations of abuse, mental health and the darker sides of growing up.

She recently released her debut EP ‘The Halo Effect’, named for her experiences of being blinded by love. The five track EP was entirely self-produced and features two previously unreleased songs ‘Velvet Tears; and ‘Ur Eyes’.

‘The Halo Effect’ opens with the short but sweet ‘One More Day’, a synthy, summery song which gets the listener swaying instantly to Mollie’s airy vocals. Beyond the candied surface layer of the song lie lyrics exploring manipulation and dependency in relationships. Mollie perfectly captures the intensity of first love with the line ‘we fell so fast and way too hard’; the romantic sounding song disguises the more sinister lyrics ‘you said if I left now it would leave a scar’. Mollie continues to balance her often melancholic words with signature bobby, wavey guitars and synths, stopping tracks like ‘Love Deprived’ becoming stereotypical and depressing breakup songs.

‘Velvet Tears’ is another song masking impactful lyrics through dreamy sounds, this song in particular demonstrates Mollie Coddled’s potential and confidence in her talent, firmly marking her one to watch for 2021. The heavenly, harmonious intro to this song instantly entrances the listener as Mollie’s vocals weave in and around the woozy, hazy backing track.

The changing pace and building of the song towards the enchanting chorus, prevents listeners from nodding off entirely but maintains a smoothness which soothes; apt for a song which Mollie wrote about worrying too much.

In ‘Ur Eyes’ Mollie experiments with sound distortion on her ethereal voice; it will be interesting to see how far she goes with this in the future. The floaty song leads into the final song on the album, ‘Rotten Teeth’; arguably one of the strongest songs on the EP. Taking the song at face value it seems to be a happy, sunshiney infused song, but delving into the lyrics things take a turn for the darker, the experience of being in an abusive relationship.

The whole song acts as a metaphor for the way abuse can often be viewed through a rose-tinted lens, and how abuse can be hidden. Mollie’s wispy vocals portray a certain fragility which makes this song all the more harrowing as she sings ‘smother my soreness with chocolate kisses’. Mollie’s skill at juxtaposing the beautiful with the morose within love, relationships and everyday experience throughout the EP is truly beautiful, we can’t wait to see what she does next.

Bittersweet indie pop with Lijie’s ‘So What’