In this article, we explore 10 ways to build meaningful engagement as a DIY musician using social media and digital marketing.

Social Media’s and the quest for engagement

It’s no surprise that Instagram’s arrival in 2010 heralded a rapid rise in Google searches for the phrase ‘social media engagement’ and this buzz phrase’s popularity has continued to surge ever since. If the content is King, engagement is the crown. But along the way, it feels like we’ve lost sight of what’s really important.

If a DIY musician dropped from outer space tomorrow and was told to use social media they would likely assume as many of us do that Follows and Likes are the prize and key to a successful music career.

It’s easy to see why… After all, it’s nearly impossible to go a day on Instagram without someone inviting you to sign up for their Instagram Growth Engine, or boost your follower number with ‘real accounts’ and this is not a new phenomenon.

“If the content is King, engagement is the crown”

Between 2003 and 2006 Myspace became the place to break artists with Sandi Thom, Arctic Monkeys and Lily Allen’s all going ‘viral’ (with some support from their major label partners lurking in the shadows).

The rumour at the time was simple… ‘Get to 1,000,000 Myspace followers and get a record deal’. Unsurprisingly software quickly appeared which enabled Myspace artists to bulk send thousands of daily friend requests for the chance to hit that magic number. Perversely as follower numbers increased, engagement decreased and Myspace artists quickly found themselves talking to nobody.

The baton was quickly passed from Myspace to Facebook in 2006 and then Instagram, and now TikTok. Becoming TikTok or Insta famous is now a paying career, so why not do all you can to boost those numbers?

Artificially boosting your follower base seems harmless enough at first and it’s only if or when DIY musicians start to pay to promote their music with ads that this fake hype becomes an issue. Here’s why…

When fake engagement becomes a problem for DIY artists

Facebook / Instagram ads allow you to retarget Followers and anyone that has engaged with you or your content in the past 180 days. Facebook can also take your engagers and build look-a-like audiences, finding other users on their platform that are similar to your audiences.

This is powerful because engaged audiences are cheaper to convert when it comes to streams, downloads, gig tickets or merch than cold audiences. So engaged followers mean valuable fans.

But herein lies the problem – if you boosted followers, or bought Likes, your fanbase is built on sand. Look-a-like audiences mean nothing and there is little point in retargeting bots that faked engagement the first time around. At this point, the cost to convert engagers is likely to be higher than reaching out to new cold audiences!

The future of engagement

The planned Apple IO14 changes bring the subject of engagement further into focus. When it’s rolled out Facebook’s ability to target and retarget your fans will be restricted and the Pixel will now only be able to live on a domain you own. While this initially feels like it’s making the challenge of music promotion even harder.  It might actually provide a reason to revisit the practice of building engagement.

At the moment the end destination for most musicians is Spotify. But Spotify doesn’t currently allow musicians to actively retarget the people that stream their music. In response, savvy music marketeers drive fans from ads to landing pages and then on to Spotify. The landing page serves as a filter, reducing bot traffic and allowing you to record both the number of people that land on your page and the number of people that click to listen on Spotify. All of these people can be retargeted and look-a-like audiences can be made allowing you to quickly scale and zero in on your audiences.

Suddenly a website that hosts the landing page becomes a key part of the engagement journey and there is more that can be done. The second simple way to boost your own first-party data is to replace your LinkTree account with your own ‘pivot/links’ page on your website. Here is an example of this idea in action from Zaritza. 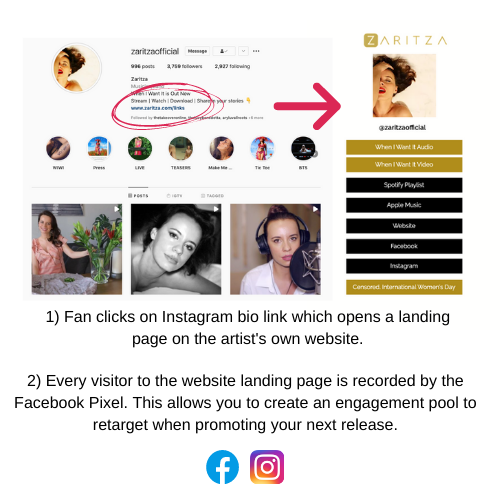 Now anytime someone clicks the link in your Instagram or Twitter bio you have data and an audience to retarget. And let’s be clear, anyone that clicks a link in your bio and actively chooses to visit your website is more engaged than someone that watched 3 seconds of your looping video without sound. Or someone that dropped a ‘Like’ because you ‘look hot’ in your photo.

10 simple ways to improve engagement as a DIY artist

This got us thinking about other ways to build meaningful engagement. Here are ten ways you could drive traffic to your website links page. These ideas all allow you to collect customer data which you can use to retarget visitors when promoting your next release. We’re sure you can think of more!

The last three on this list provide engagement, income and data. After all, there is no better engagement than an actual paying customer.

The case for vinyl to build engagement

And this brings us to vinyl. When you think back through the history of music consumption there can be few moments that will ever beat the joy of vinyl. Nothing beats physical engagement.

In the last 10 years, there have been numerous stories about its resurgence. Obviously, it’s never going to be the dominant consumption method, but in the age of digital, beautiful, limited edition vinyl is a welcome alternative. Previously un-signed artists have been forced to shy away from vinyl due to prohibitive printing and production costs. And let’s face it nobody wants their flat filled with boxes of unsold records!

Step forward Qrates, one of our favourite new discoveries. Qrates make it easy for artists to press vinyl, so fans can keep pieces of the music they love. They provide full-service pressing and a global retail network to distribute.

The best bit… they let you keep up to 85% of profits. Qrates also allow you to press and sell or set up a fan-funding campaign to removing the upfront costs. If you want to try Qrates out on your next release, visit this page and claim a discount on your first pressing.

So next time you hit the ‘Gram’ and a message pops up inviting you to boost your followers, think again. True engagement means more than a Like or Follow.