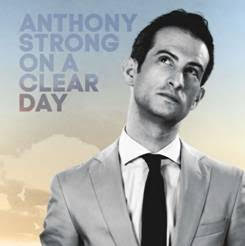 Despite building a reputation as much for his classic British style as his swaggering vocals, feel-good live shows and a piano style reminiscent of a young Harry Connick Jnr, Anthony Strong’s biggest achievements so far have all come overseas and, until now, slipped under the radar of much of the British media.

Often billed affectionately overseas as ‘The English Gentleman’ or ‘La Classe Britannique,’ Strong has the panache of a young Hollywood screen idol and is signed alongside stars such as Carla Bruni, Katie Melua and Marianne Faithfull to Naïve Records, one of the most prestigious record labels in France, where his last album was announced on the front page of daily news titan Le Figaro. NPR in the USA, where his last record topped the iTunes Jazz Charts, recently invited him to Hollywood to record a 60-minute interview feature with American songbook legend Michael Feinstein. In China, where he headlined the 2014 Shanghai Jazz Week, he spent two hours after the show signing CDs under police escort and was featured on Asian MTV-style giant Channel V. ‘The German Jonathan Ross’ – Harald Schmidt – invited Anthony to be a guest on his TV show and the last album was launched with a live performance on the country’s biggest breakfast TV show ZDF Morgenmagazin, again reaching #1 in the jazz charts.

Strong spent his formative years studying at three of England’s most prestigious music schools – first classical and then later jazz. However, it was an out-of-the-blue offer of a nine month spell as understudy to Jerry Lee Lewis in a London West End musical that shaped his career most noticeably to where it is today, developing a stagecraft and audience engagement that has come to characterise his spellbinding live show.

Anthony’s new album ‘On A Clear Day’ took two years to bring together and is a statement of intent to continue doing what he does best. The repertoire is unashamedly ‘old school’ – from jazz standards and classics, through to early Stevie Wonder and Motown – a cross section of his personal record collection. There is nothing ‘old’ about the treatment of them though. Taking on arranging, composing, band leading, orchestration, and producing duties himself, the songs capture the fresh, positive and feel-good energy of his audience-winning tours. Anthony explains, “In mid-2013, I started compiling a list of songs that would form the basis of my new record. I’d played a handful of big band shows over the last year, and I found myself addicted to the sound of a big horn section. I knew the sound I wanted (more energy and “POW!”) and so I started on the arrangements. A week later I’d finished all the songs.” Anthony drafted in over twenty musicians – a wealth of UK-based talent – to help fulfil his vision, including Seb De Krom (Jamie Cullum), Nigel Hitchcock (Ray Charles), Gareth Lockrane (Michael Kiwanuka) and a horn section featuring some of London’s top session players.

During the last three years Strong has built a worldwide fan base that has seen big venue tours across 26 countries and 4 continents. Armed with his sharply tailored suit, a cracking album and an easy charm, 2015 is set to be the busiest yet.

The Slacksons Find Their Groove In ‘Stormy Weather’