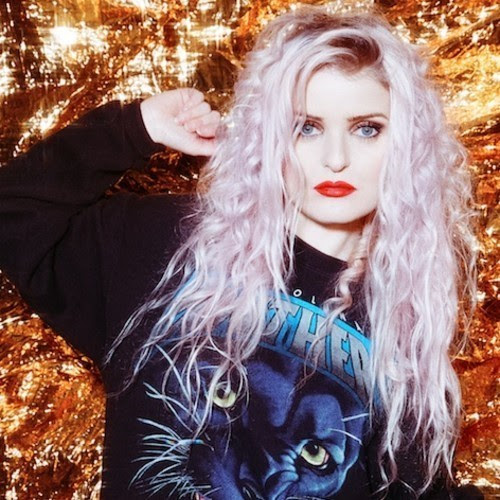 Shell Shocked is the latest track to be lifted from her much-anticipated debut album, ‘Selectadisc’, which will be released on June 2 (RecordShop). The original to ‘Shell Shocked’ is available instantly when pre-ordering the album (also available as a limited edition 12” vinyl here.

Selectadisc, Nottingham’s iconic independent record-store, closed its doors for the final time in 2009. It’s always more than ‘just a shop’: unwind the DNA of dance music and you will find places like Selectadisc at the heart of it – and at the heart of us. This DIY, indie aesthetic would emerge strongly in Ronika: a multi-talented singer, songwriter, producer, remixer, DJ and video maker, who started sneaking into local hip-hop clubs and house sound systems in inner-city squats at the age of 14. The burgeoning musical tastes she brought back would be sought out in Selectadisc, and are paid tribute to on her debut album; a record which, as if by browsing through the shelves themselves, assimilates a crate-digger love of disco, hip-hop, house, R&B and electro-soul into her effortless grasp of modern pop.

Ronika’s introduction to electronic music came via her vinyl-hoarding brothers, and also a group of computer nerds at school, with whom she started making tracks. An ongoing interest in producing her own material was accelerated at aged 17, when nodules on her vocal cords (“I sounded like Marge Simpson”) enforced a two-year ban from singing and clubbing. She decided to study sound engineering and began making music inspired by the likes of Egyptian Lover and Afrika Bambaataa but would be patronised by boys (not for the last time) who’d assume that someone else must be behind her tracks. “Even now, people will tell you to forget about production and let guys do it for you. There weren’t many female production role models for me growing up, and I wanted to try and change that.”

Much like her disco predecessors, the thrilling, escapist mood of ‘Selectadisc’ is born from less-than-glamorous circumstances. Ronika and her childhood sweetheart, who she married aged 19, moved into inner-city Nottingham whilst both worked on music, with many of the events that would grace national headlines taking place “literally on our doorstep.” The young couple would also find the bonds of neighbourhood spirit which get reported less: between DJ gigs and sound engineering, Ronika worked part-time teaching kids who’d been kicked out of school how to write, produce and sing, whilst local-octogenarian-jazz-singer and mentor Charles Washington lends his deep Southern baritone to the nocturnal council of ‘Clock’. It’s an emotional push-and-pull of a hometown relationship which is captured in the arch “I’m bouncing off the wall / nowhere to fall” hedonism of second release ‘In the City’. And it’s a symbiotic affair: just last year, the Nottingham Evening Post ran a story genuinely entitled “What Ronika has for Tea.”

‘Selectadisc’ includes an acclaimed clutch of singles, all refined, remixed and painstakingly constructed – in the most literal sense. Ronika was diagnosed with an incurable auto-immune disease early on in the project, repeatedly delaying the album’s production, with a personal impact she compares to “a wave crashing over you and pulling you under, and you don’t know if you’re going to reach the surface again.” Above all, though, ‘Selectadisc’ is a deeply positive album, in which hard times are overcome through an interconnected chain of detachment, dance music, and love. Songs are married to an equally strong visual aesthetic, inspired by a love of hazy VHS tape, Day-Glo early-MTV saturated colours, and imagery from science and technology magazines.

Whilst lining up some exciting new collaborations for 2014, Ronika has already worked with the likes of Mylo and Herve, and recruited an eclectic cast of co-producers for a handful of songs on ‘Selectadisc’; Mixmag’s best new DJ of the year (Citizen), Brooklyn duo Javelin, and local hip-hop pioneer Joe Buddha. She was also selected to take part in the esteemed school for electronic music Red Bull Music Academy, which saw her earn support from Nile Rodgers (“pretty dope”, he tweeted) and Bootsy Collins. And though the spirit of the Selectadisc store lives on in countless different ways, you can tally up a good few of those in Ronika. Her debut album filters an array of classic sounds and hard-worn experiences into something fresh, feel-good, and fulfilling. Like the shop itself, whatever you’re looking for, the chances are, you’ll find it in ‘Selectadisc’.

James Greenfield is ‘Returning’ with his indietronica sound