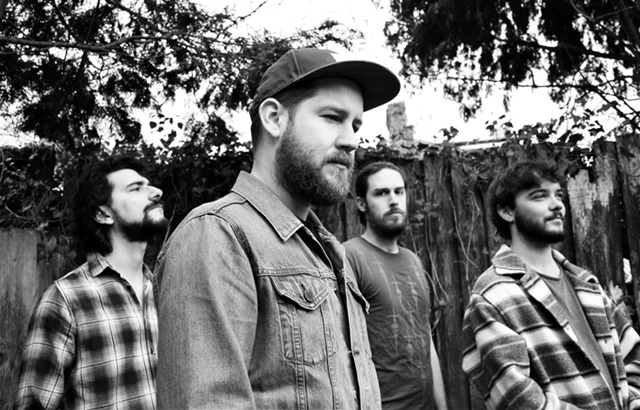 Citing influences from Phosphorescent, Eels, and Canada’s The Deep Dark Woods, the band describe their sound as ‘Dark Country.’ The darkness is certainly evident, the country twang thankfully understated. According to Robertson, the new songs “…are about the gnawing uncertainty that is experienced by many of us, certainly in these strange modern times…I try and evoke a sense of what I truly believe – that there is hope in resilience in the spirit of man.”

Recording took place earlier this year at the band’s own studio in Haringey, and the two new songs are part of a bigger body of work that includes a soon to be released EP. The band prefer to record quickly, playing live together in the studio, a process that they feel retains the human element to their sound. The result is a recording that is polished, yet retains that distinctive ebb and flow that only a live band can produce.

‘Slow Morning’ has a laid-back, steady tempo, awash with Cold Roses era Ryan Adams influence. As the title suggests, it is the subtler of the two tracks, with the rhythm section providing an incessant but unhurried momentum, backing a repetitive and reassuring simple guitar melody. The layered intermittent lead guitar provides a point of difference, especially in the solo, which begins with alt-country licks, before transforming into psychedelic effects laden loops.

“It’s just another damn slow morning” is repeated throughout the song, as Robertson pines for a bit of escapism, “There are so many places we could be, lets have a holiday, just you and me.” The vocal delivery is understated, quiet at times, encapsulating the theme of the release; a sense of comfort and calm that never quite manages to overshadow the underlying sense of sadness.
‘Terminal’ finds the band stretching their legs, getting a little rowdier, with the electric guitar particularly standing out, its sharp attacking tones contrasting the smoothness of the rest of the song. The guitar manages to be ever present yet sporadic, bending notes to the point of being out of tune, but thankfully never quite crossing that line.

The more upbeat of the two tracks, ‘Terminal’ would be an exceptional closer to their live set, the chorus instantly catchy, the anthemic outro with its wailing guitar and layered vocal harmonies making it very sing-along-able (if such an adjective exists).

With an EP on the way, Slow Morning/Terminal certainly whets the appetite for what is to come. The double A-side gives a hint of the range of the new look Lewisburg, and having already received airplay and media coverage in both the UK and the US, it is clear that there are big things on the horizon.

Slow Morning/Terminal is out now via the bands own label, Artshift Records, and can be heard on Spotify, Soundcloud, and iTunes. For more information about upcoming shows and the soon to be released EP, head to the bands’ Facebook and Twitter pages.