Back in June we launched The Big Survey in association with Farida Guitars.  Our aim was to better understand the realities of being a musician in 2013. The online survey was completed by 200 musicians, of which three-quarters were unsigned or independent. Two-thirds of the respondents reported they had released at least one single.  The vast majority of respondents came from three countries: UK, Australia, and the USA.

Results highlight the increasing number of sites and services used by artists to promote their music. It’s no surprise that Facebook dominates, but it’s interesting to see the growing importance of Soundcloud and Bandcamp and the much heralded fall from grace of Myspace.

Just over one-half of the respondents reported paid live shows were the primary source of their monthly income. Digital download sales (13%) and CD sales (12%) were second and third respectively. Over six different incomes streams were reported. Although average incomes from live shows were not captured in this survey Right Chord Music would expect income from live shows at this level to be between £20-£50 per show, and a band to be playing a maximum of three paid shows within an average month. It’s clear once income is divided up between 3-4 band members and petrol, parking, hire, and rehearsal costs are factored in, income does not necessarily mean profit. 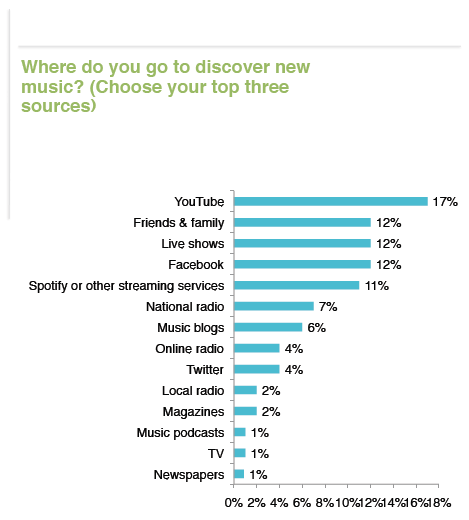 Bedroom and DIY culture is very much alive and kicking, with just under one-half (49%) of respondents reporting they record all of their music at home. Twenty-eight percent (28%) reported they record demos at home before heading to a professional studio to add a professional touch to their work.

To professionally promote music costs money, Right Chord Music estimates between £300-500 for online PR, and £600-£850 for radio plugging for a minimum of two months. Then there is press and TV, the cost continues to rise. Based on these costs, and their unsigned status, it is no surprise that the vast majority (87%) of respondents in this survey reported they have to promote their music themselves. 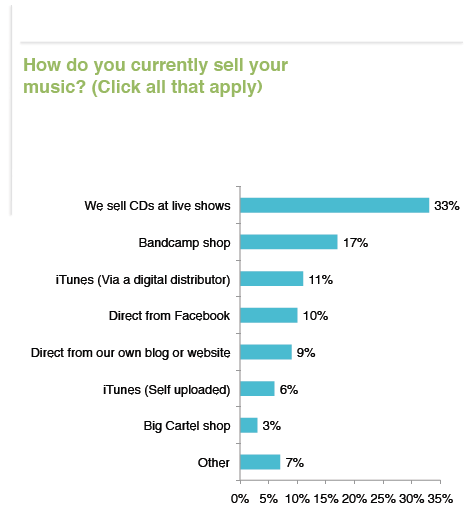 When respondents were asked to highlight the biggest challenges they face as musicians two dominated: ‘Getting our music heard’ and ‘Making enough money.’ But equally noticeable is the large number of challenges they recognise and struggle to overcome. It is certainly not easy to be a musician in 2013.

To download your FREE copy of the full report click here. RCM The Big Survey With Farida

In return for sharing their views, respondents were invited to submit one original track for the chance to win a free Farida Guitar and feature on the Right Chord Music blog and our Lost On Radio podcast. We received almost two hundred entries, and after days of listening we arrived at eight incredible and very different finalists:

Hear all eight finalists below.

The Right Chord Music and Farida judging panel were then asked to submit their votes. It couldn’t have been closer, with the panel unable to separate them. Everyone had their favourites.

To decide on a winner, we decided to ask the artists, why they should win, and what it would mean to them. We received passionate, emails, photos, drawings and our winner wrote a song!

We can now reveal the winner of the Farida Guitar is Sam And The Sidechains with their track ‘Fade To Black.’

We absolutely loved the originality of the track, the haunting vocals immediately caught our attention. The track was written in 2012, while singer Sam Craggs was on a break, working as an intern, assisting on the orchestration of a new score for Alfred Hitchcock’s ‘The Lodger’. The track was then recorded over 2012/2013 in bedroom studios in Faversham (Kent), Loughborough (Leics) and Huddersfield (West Yorkshire). Musicians: Trumpet performed by George Green. Trombone performed by James Howard. All other parts written, arranged, performed and produced by Sam Craggs.

Congratulations to Sam And The Sidechains, a Farida Guitar is heading your way! Listen out for ‘Fade To Black’ on a future episode of The Right Chord Music ‘Lost On Radio’ Podcast.

Thank you to everyone that took part in this project, it’s been a brilliant journey.  We look forward to supporting all of these artists in the future.