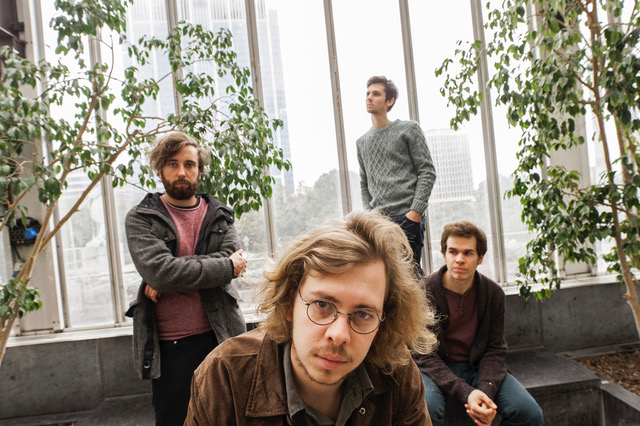 The mysterious Sun Gods from Belgium release their new single Subtle Science, the chorus is catchy and repeated enough that you can’t help but have it rolling around your head for the rest of the day. Despite not having any major dynamic shift, the song still manages to be mesmerising.

The bio section on Sun Gods’ Facebook page states the band hail from the small town of Tremolo, about an hour  north-east of the Belgian capital Brussels.  Apart from that information, it seems the band prefer not to give away too much about themselves.  Perhaps this is partly due to the fact that the four-piece are a relatively new enterprise, starting out just last year with the release of their first single ‘Voices’.

Despite the relative infancy, the members do have a history of making music together.  The two main driving forces behind the band are singer/guitarist Brent Buckler, and guitarist/synth player Sander Cliquet.  The two previously played under the name ‘Barefoot and The Shoes’ which since 2013 was completed by Bassist Vincent Lembregts, and Drummer Marjin Geerts.

Third single ‘Subtle Science’ finds Sun Gods displaying their range.  Previous singles ‘Voices’ and ‘The Beauty of Belief’ are both musically complex, the retro influence from the likes of David Bowie and Peter Gabriel are in evidence.  The multi-layered complex production is all but gone in ‘Subtle Science’, the band displaying their indie influence, a nod towards The National or perhaps Bon Iver’s self-titled second album.

The song opens quietly, with just synths and vocals, really allowing the listener to appreciate and be charmed by vocalist Brent Buckler’s gravelly yet smooth tone, delivered at times with a Springsteen like inflection.  It is perhaps apt, given the songs’ title, that there is subtlety to the music, the understated drums and bass gently join after the first chorus, combining to provide a perpetual rhythm.  The synths provide much of the backing, with a wonderful baritone electric guitar used sporadically for impact in-between verses.  Already picked up by Radio 1 in Belgium, the band have released an accompanying clip is a really inventive take on the lyric video, managing to use just words to create a captivating video.

Shorter than previous singles, which were pushing five minutes, ‘Subtle Science’ is just over the radio friendly 3:30, and displays far more pop sensibility than their first two singles.  Deliberate or not, the chorus is catchy and repeated enough that you can’t help but have it rolling around your head for the rest of the day.  Despite not having any major dynamic shift, the song still manages to be mesmerising.

Sun Gods are playing shows throughout Belgium in October and November, see their Facebook page for more details.  Fingers crossed they manage to cross the channel (whilst they still can) for some UK shows soon.  For more, or less in their case, info visit their Website, Facebook, and Instagram pages, and listen to ‘Subtle Science’ and previous two singles on Spotify.