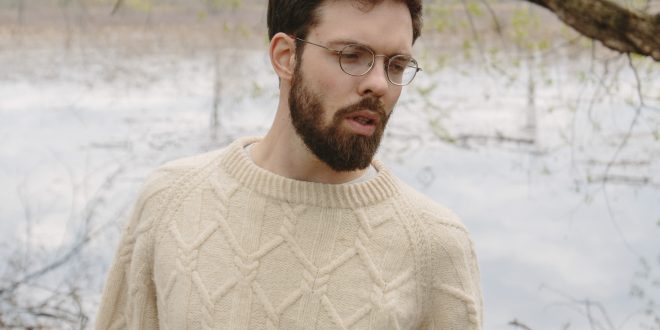 To say that Henry Jamison has music and poetry in his blood would quite the understatement.  The son of a classical composer, Jamison is descended from popular Civil War era songwriter George Frederick Root.  If you go even further back, the family tree reveals 13th Century poet John Gower, a close friend of Chaucer and Richard II, and is often referred to as ‘The First English Poet.’

It is difficult to imagine that one could inherit poetic talent from such a distant ancestor, however maybe it is something that can be passed down by genes, as Henry Jamison does have a wonderful way with words.

His debut album is The Wilds, set for release in late October, and is twelve tracks that skilfully intertwines life’s big issues with the stories of day to day life.  What seems like an incompatible combination manages to render Jamison’s stories instantly relatable, the singer revelling in the poetry that is offered by the mundane.

His debut EP The Rains was released in 2016, and has thus far managed to reach a staggering 24 million streams of Spotify, the song ‘Real Peach’ reaching over 14 million alone.  That track, as well as ‘Through a Glass’ and ‘Dallas Love Field’ from the EP have been included on the debut long player.

‘Real Peach’ immediately struck a chord with listeners, and created what the industry loves to call ‘a buzz’ around Jamison and his music.  Tackling the common theme that is the rollercoaster of relationships, the singer wonders, like so many before him, “If all is fair, in love and war/then I don’t know what we are fighting for.”

‘Through a Glass’ is an album highlight, tackling infatuation, death…and car trouble.  The song opens with a quiet ambience, the sombre and eerie double tracked vocals sadly singing “Through a glass of the bottle, all is green and bent…She was my dearest friend/And she will go to heaven/So maybe I can see her again.”  Despite the dark and embittered lyrical content, the song is musically upbeat.

In ‘The Jacket,’ Jamison searches for an authentic connection in the modern landscape of phones and climate control; “I was on my phone for half an hour and bleached in the white light glare/I just soaked up all the light from the flat screen/Oh where can my little darling be?  Finding himself at a loss for words, he sets the scene wonderfully with “What was I supposed to say to her?/In the grocery aisle, in the air conditioning.”

Recorded in a mountainside house in the small town of Goshen, Vermont, The Wilds is centres around Jamison’s voice and guitar.  The backing band provides different shades, allowing for an upbeat mood and sound that contrasts the serious nature of the lyrics.  Quieter moments like ‘Black Mountain’ and ‘Varsity’ suggest the influence of Bon Iver or Iron & Wine, the grander, more orchestral sound a perfect fit with Jamison’s song-writing.

Like a lot of acoustic guitar driven folk music, The Wilds is an album that may find itself in the background, which would be a great shame.  Despite the similarities in instrumentation, there is a great deal of diversity amongst the twelve tracks, and Jamison’s lyrics deserve close attention.  With over a million monthly listeners on Spotify alone, it seems a lot of people have already made this discovery.

Henry Jamison is currently on an extensive tour of North America, before bringing the new album to his ancestral home, playing shows throughout the UK and Europe in September and October.  The first two singles ‘The Jacket’ and the title track ‘The Wilds’ are available to stream on Spotify, with the album due for release on the 27th of October via Akira Records.