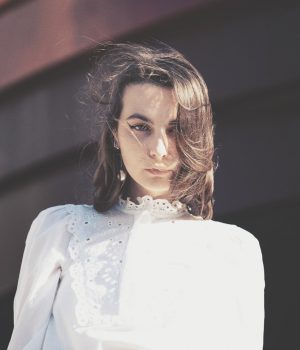 The song is a true expression of the singer-songwriter and her intentions for her new journey into the music industry. Her powerful ballad voice shines through in Swim Far and her influences (Lorde, Grimes, Banks and Lykke Li) are apparent throughout the song. Swim Far perfectly expresses Lara Snow’s true colours and personality.

‘I stay home every night and write what’s on my mind, my mind’s an open book, when you try to forget, holding on and you swim far…” Lara says: “At a young age I got into a toxic relationship and it changed who I was, I carry these feelings with me ‘till this days.”

As Lara’s song is called ‘Swim Far’ she speaks of the common themes that are present within her songs. “I think this is the reason why water metaphors come often in my songs, for a long time I was trying to reach out for air and felt like I was choking, fighting to keep my head above the water…at one point I decided that I’m only going to keep people in my life who make me a better person”.

The musician had her humble beginnings in 2016, where she debuted her single ‘Sometimes it’s Enough’ which had positive reviews throughout European blogs. She then relocated to Berlin, Germany where she wrote a handful of pop songs. For the single ‘Swim Far’ she spent the first winter self-reflecting and translating her deepest emotions into words and melodies.

‘Swim Far’ was produced in London by Miedo Total and mixed by Ori Rousso and Noam Levinberg. The music video is very cleverly shot with an iPhone in Geneva and Tel Aviv by Lara’s partner, Jonathan Harpak. The video has a strong vintage presence, despite the camera it was shot with and visually soft and aesthetically pleasing to watch. Lara says: “We wanted to create a video that will convey the emotions of the song. Not to tell a story, but to pass on a feeling: how does it feel to be surrounded by people but still alone”.

Lara Snow’s Swim Far is OUT NOW on Spotify.